I have a secret. Well, not a secret, more so just something I don’t talk much about. I am 44 years old. I have been married for 24+ years and am the mom of two pretty amazing kids. I love being a writer. But I haven’t always done much of it. I wrote short stories as a kid, often with the help of my dad. As a teen, I wrote a lot about new experiences. Space Camp, Summer Camp, Trips to Colorado and Chicago, Relationships, Heart Ache, Family Turmoil.

I guess I stopped writing anything other than poetry at the end of my senior year of high school. Poetry flowed out of me so fast and ferociously, that it actually scared me a bit. Raw emotion found its way onto the page before I had a chance to realize what I was writing about. But school, youth group, high school musicals, singing, relationships, and then the busyness of college made all that writing take a backburner.

I married young, worked as a Banker for years, and then as a Bank Consultant and a Professional Organizer. I love being an Organizer and working in a different person’s home every day. I love approaching each new task and finding a solution to the organizational woes of the American Home. But, I have only been actively writing for three years. Why? Why is it that something I love doing is something that I walked away from? Why is it that I let the busyness of life overtake me and that I let it steal what brought me joy?

I have never been lacking in the self-esteem department. Being overly confident has often been my downfall. I found myself struggling with jealousy. I had two friends who were succeeding as writers and saw books after the book being published. One of my friends made an attempt at a career change from a dead-end corporate job to public speaking and booked 16 gigs in the first 6 months. And yet another friend quit her job of 21 years so that she could pursue her artistic passion and sold piece after piece. When I sat down and poured out my heart to a dear friend about how I was feeling, watching everyone succeed around me, she said something to me that stopped me dead in my tracks. She said I wasn’t a failure because I haven’t yet done something amazing. Hold up. Wait a minute. Failure? I never saw myself as a failure until she said that.

I was fully aware that she was trying to comfort and redirect me, but the self-doubt set in. Was I a failure? What have I done to make a name for myself? Is making my name known even something that I want? Have I failed because I don’t live up to everyone else’s level of success? I even started to question if others viewed me as a failure or if they expected more of me at this stage in my life.

I found myself stuck in a state of discontentment, often analyzing, overthinking, brainstorming and strategizing. I knew that many women, of a “certain age”, struggled with their identity, figuring out what their role is, and how they can make changes to improve their life as they know it. I would cry talking to my husband when explaining my feelings about possibly being a failure. He would hold me, love on me, and ask me when it was that I started letting others set the bar for me. He asked me when I started being concerned about what others thought of me. He also was
very good at pointing out all that I had accomplished. My heart sang when he told me I was a great mom and wife. He told me how proud he was of me and the fact that I had started my successful Organizing business from the ground up. He also complimented my efforts at helping others and desiring to meet the physical tangible needs of the underserved local community. He told me he loved me, supported me and would help me do and accomplish anything that I set my mind to. And then, Josh Gavin, God love him said, “Stop comparing yourself to others. Stop viewing yourself as a failure because others have succeeded differently than you have.”

That was it. There isn’t a specific tool that could be used to measure success. Success is determined by the person who has set a goal or has decided to pursue a passion. My success and the path that I chose to take would be left up to me. No one would be grading me. No one would say, you shouldn’t pursue your passion anymore, it is too late. You aren’t 25 years old. Your time has passed.– And if someone was shaking their head at me, or tongues began to wag, I didn’t care. My age wasn’t going to be a factor anymore. I have had a life well lived so far! I had experience and wisdom! I had more stories to tell because of the life I have lived!

I found myself researching women. Specifically women who had succeeded later in life. In their late 30’s and beyond. I still had my entire life ahead of me. I made the decision right there and then. If writing had been so important to me once, I needed to pursue it again. Viola Davis, one of my favorite actresses, dealt with extreme poverty as a child, often not knowing where her next meal would come from. Today, at 52, her name and talent is known worldwide. Vera Wang didn’t even entertain the idea of being a fashion designer until she was planning her own wedding at 40 years of age. Julia Child didn’t even start cooking until her mid 30’s. Louisa May Alcott was 37 before any publisher even considered publishing one of her books. Judi Dench earned her first Oscar at 64. Susan Boyle never even sang in public until she was 48. And Laura Ingalls Wilder didn’t share her stories with the world until she was 64.

My mother passed away almost 7 years ago. I wanted to honor her and write down my memories, but I couldn’t even pick up a pen. I often ended up in a puddle of tears and at a loss for which memories I should share first. I am a note-taker. I started keeping a small writing notebook and pen in my purse or bag about 3 years ago. Each time I thought of something that would make for an interesting story, I would write it down. Sometimes it was a sentence, sometimes it was a paragraph or random words all thrown together that only made sense to me. Sometimes it was a single word. Basement. Flowers. Wood Ticks. His smile. Her ability to make friends. The Christmas Tree. These words made sense to me and in the notebook they went. By approaching my note taking this way, those tears became fewer. I was able to see stories taking shape, and rather than being stuck on the loss, or pain of memory, I was excited and the stories started to write themselves. The short stories were like a weight being lifted from my shoulders.

I started writing for the local newspaper, entering poetry contests and writing mostly stories just for myself. Almost like keeping a journal or blog, but not sharing much of it with others. I won a couple of prizes for entries I had made and loved it. People stopped me at the library or at Target to tell me they enjoyed reading my newspaper articles. I began to write more.

Not every day, but weekly. I realized I was creating a habit by writing more frequently. I desired to write, I wanted to write. And then I realized I had to write. It wasn’t just flowing from me once again, like the poetry had in high school, I couldn’t keep the stories in me if I tried. I found myself boring friends and family with long stories of days gone by, and each time, they said, write it down. Just write it down.

What have I been doing my whole life not writing? What made me think that I should have been doing anything else? I now enjoy blogging, I continue writing for Southwest Media (17 small-town newspapers), for Poetry and Short Story Journals and occasionally still enter a contest or two. I have 15 anthology books published and 2 of my own. I enjoy knowing that something I love doing actually means something to others. That something I have written can and will touch hearts and change lives of people I may never meet. My idea of success was never to become famous and known around the world. My idea of success was to inspire others by telling stories that matter and make people’s lives richer.

Like I mentioned. I am 44. I don’t often speak of my age now that I am over 40. But now I find myself wanting to share my age with others. I want to share my story with others. It took me 40 years to find what I should be doing. Writing fills my soul. It inspires me. It makes me want to share my joy. It enables me to share stories of my life that I think others need to hear. But mostly, it means I didn’t fail. It took me 40 years, but I didn’t fail. I need to remember that. Daily. When I am discouraged. When another decline email or is received. The realization that it took me a long time, but I am doing what I love, is of the utmost importance to me. 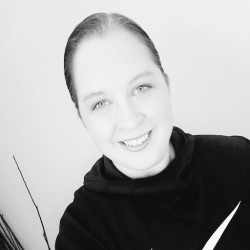 Prepare Yourself For 2019 Right Now!

Entrepreneurship And Introversion: Can It Be The Perfect Match?

I am happy to find you here. Hope you are having a pleasant time. Cheers! I am currently pursuing my Master in geography and I am from India. I love reading and writing about self-improvement stuff. Here are three quick facts about me. 1. I believe that the world is magical. 2. Black is my favorite colour. 3. I love stationery items.

Do you realize your power? For more such affirmati

Calming Strategies for Your Mind and Body (For mor

In essence, what you say to yourself matters way m

Do you realize your power? Do you know that you ar

Emotional balance creates a stabilisation between

Do you sometimes feel lazy? Maybe, sometimes, you

Don't get carried away by the chaos around you. .

Having a morning routine is critical to ensure tha